Thank you for visiting!

Avast me hearties! Today is the day that I tell my tale of my first adventure in Sea of Thieves.

The day started out like any other. This was the day where I finally decided that I was going to gain my sea legs.

I was a young pirate with a taste for adventure and a thirst that only grog could quench.

My adventure started out like most adventures do: with a dream.  Dreams of plundering gold and riches and achieving pirate-like fame!

I found it most fitting to begin my adventure solo which would later prove to be a rather fatal mistake. Pirates need a crew after all, right?

I was armed with my trusty weapons, a few wood planks, a couple of cannonballs, and enough bananas to choke a parrot. With my accepted voyage proposed, it was finally time to set sail.

After adjusting my ship’s sails and raising the anchor, my adventure had officially begun!

After locating the buried treasure spot on my voyage map, I sailed almost completely across the map through some treacherous waters to the island designated on my map.

With my trusty shovel in hand, I began to dig until I heard a loud “clank” which could only mean “Hey, there’s a buried treasure chest under here!”

I dug and dug until finally, the treasure chest was exposed, gleaming with the possibility of vast riches! 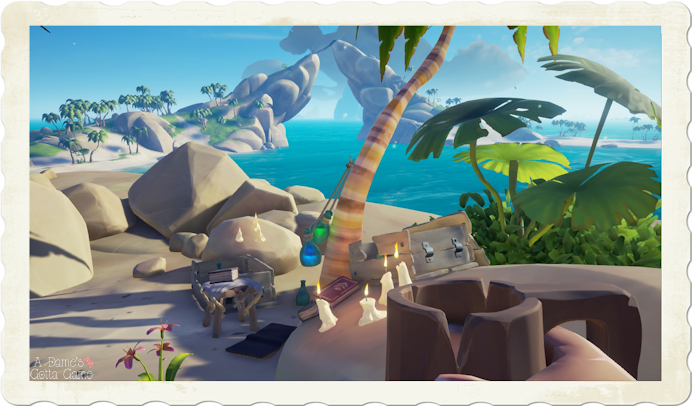 After all of that digging, I chugged down a flagon of grog and hauled my newly found treasure chest back to my beloved ship.

After a long and exhausting trip of sailing back to a sanctuary to sell the treasure chest, I was giddy with the excitement of finally purchasing that eye patch that I had my eye on. (You see what I did there?)

I managed to make it back to a sanctuary and could hardly wait to set foot on the warm sand.  The world was truly my oyster and I could almost smell the gold I was about to earn by selling my treasure chest.

With the smell of salt in the air and storm clouds on the horizon, I heaved the treasure chest into my hands and made my way towards the beach.

This is where the adventure goes South really fast.

As soon as I set foot on the beach, a loud boom crashes against my eardrums.

No gold, no riches, no sweet eye patch. *Sigh*

When I “awoke,” I found myself aboard the Ferry of the Damned, which admittedly, looks AWESOME!

I decided to just hang out with Mr. Ghost Captain (Davy Jones is that you!?) for awhile and enjoy the ghostly scenery.  He may have been trying to take my soul, but at least he wasn’t trying to take my beloved treasure! If you haven’t noticed yet, I’m still rather salty and/or crabby about my stolen treasure chest.

Thinking back, I guess I technically stole the treasure from the pirate who buried it.  Perhaps it was fate, or perhaps it was merely karma.

Even though I was left with empty pockets and a few healing gunshot wounds, I still had an amazing adventure.

I highly recommend visiting the Ferry of the Damned. It seems like it could be a great pirate travel destination.

All in all, my adventure may not have been a success, but I’m certainly looking forward to new adventures (with a crew next time!)

If you’ve played Sea of Thieves, what was your first pirate adventure like?

Did you sail solo or with a crew?

2 thoughts on “My First Pirate Adventure In Sea of Thieves”